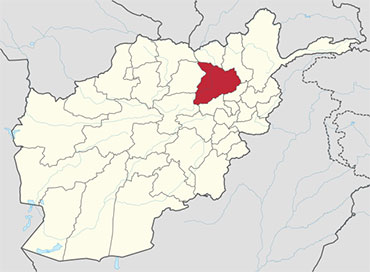 Baghlan in the Afghanistan Map

Baghlan is one of the thirty-four provinces of Afghanistan. It is in the north of the country. As of 2013, the province has a population of about 863,700.Its capital is Puli Khumri, but its name comes from the other major town in the province, Baghlan. The ruins of a Zoroastrian fire temple, the Surkh Kotal, are located in Baghlan. The lead nation of the local Provincial Reconstruction Team (PRT) was Hungary, which operated from 2006 to 2015.

The name Baghlan is derived from Bagolango or “image-temple”, inscribed on the temple of Surkh Kotal during the reign of the Kushan emperor, Kanishka in the early 2nd century CE. The Chinese Buddhist monk Xuanzang traveled through Baghlan in the mid-7th Century CE, and referred to it as the “kingdom of Fo-kia-lang”.

In the 13th Century CE, a permanent garrison of Mongol troops was quartered in the Kunduz-Baghlan area, and in 1253 fell under the jurisdiction of Sali Noyan Tatar, appointed there by Möngke Khan. Sali Noyan’s positiion was later inherited by his son Uladu, and grandson Baktut.[3] These Turco-Mongol garrison troops (tamma) formed the Qara’unas faction, and by the 14th Century had allied with the Chaghataite Khanate. Under the rule of Temür the Qara’unas were given to Chekü Barlas, and then to his son Jahānshāh. Forbes Manz notes that these Kunduz-Baghlan forces appear to have remained cohesive and influential throughout the Timurid period, though under different leaders and different names, up until the Uzbek invasion. By the Islamic year 900 (1494-1495 CE), the area was noted in the Baburnama as ruled by a Qipchaq emir.

In the mid-20th Century, as Afghanistan became the target of international development from both the Western and Soviet world, agricultural-industrial projects were initiated in Baghlan. These included factories for the production of sugar from sugar beets (initiated by Czech experts in the 1940s[5]) and for vegetable oil.[6] Czech expertise also figured heavily into the development of Baghlans’ coal-mining industry,[7] centred at Baghlan’s Karkar Valley, the only coal mine in Afghanistan to remain operational up through 1992.

The modern Baghlan Province was created out of the former Qataghan Province in 1964.

During the Soviet–Afghan War, the Soviets in 1982 established the Kayan military zone in southern Baghlan. The area was defended by 10,000 Ismaili militiamen, increasing to 18,000 by 1992, who sided with the Soviets due to differences with the Islamist opposition. Afghan Ismailis overall were inclined to support the Communists, though a local Ismaili leader, Sayed Manuchehr, lead a partisan movement against the Communists until Ismaili leader Sayed Mansur Naderi accepted Soviet support.

Large portions of Baghlan and neighbouring Samangan Province were under the sway of the Soviet-aligned Naderi clan, the hereditary Ismaili Sayeds (spiritual leaders) of Kayan. Under their jurisdiction, was largely quiet and societally functional throughout the 1980s, with hospitals, schools, and administrative services, funded by the communist central government. Despite the Naderi’s alliance with the Communists, they also maintained positive relations with the Mujahideen as well, permitting them to move through the area provided they refrained from attacks.

As the 2001 Afghan War commenced, Ismaili spiritual leader Sayed Mansoor Naderi attempted to retake Baghlan from the Taliban. Naderi was aligned with Uzbek warlord Abdul Rashid Dostum and his Jumbesh-e Milli party, and the competing Tajik-dominated Jamiat-e Islami party was also keen to seize control of Baghlan as Taliban power eroded. The Jamiat were able to seize the capital of Pul-i Khumri before Naderi, who despite his strong backing among the Afghan Ismailis and Shia Hazaras, was unable to rally enough supporters to control the province. Naderi failed to retake the capital in 2001 and 2003, in the latter event he was forced by the dominant Andarabi militias to fall back to the Ismaili bastion of the Kayan Valley, and then to flee the region.

On 13 June 2012, two earthquakes hit Afghanistan and there was a major landslide in Burka District of Baghlan Province. The village of Sayi Hazara was buried under up to 30 meters of rock, killing an estimated 71 people.