Herat is one of the thirty-four provinces of Afghanistan, located in the western part of the country. Together with Badghis, Farah, and Ghor provinces, it makes up the south-western region of Afghanistan. Its primary city and administrative capital is Herat City. The province of Herat is divided into about 17 districts and contains over 1,000 villages. It has a population of about 1,780,000, making it the second most populated province in Afghanistan behind Kabul Province. The population is multi-ethnic but largely Persian-speaking.Herat province shares border with Iran in the west and Turkmenistan in the north, making it an important trading province. The Trans-Afghanistan Pipeline (TAPI) is expected to pass through Herat from Turkmenistan to Pakistan and India in the south. The province has two airports, one is the Herat International Airport in the capital of Herat and the other is at the Shindand Air Base, which is one of the largest military bases in Afghanistan. The Salma Dam which is fed by the Hari River is also located in this province.

The region of Herat was historically part of Greater Khorasan, which was successively controlled by the Tahirids followed by the Saffarids, Samanids, Ghaznavids, Ghurids, Ilkhanates, Timurids, Safavids, Hotakis, Durranis until it became part of the modern state of Afghanistan.

City of Herat, which is the capital of the province.

An Afghan Air Force Mi-17 helicopter sits on the ramp at Shindand Air Base in 2011.
During the 19th century, the British arrived from southern Afghanistan as part of its imperialistic policies and backed up the Afghans during one Dari siege and one capture of the city, the former in 1838, and the latter in 1856 in order to prevent Dari or Russian influence reaching deeper in South Asia, and also, more importantly, Britain’s colony India as part of the Great Game. In the process, parts of the city of Herat were destroyed. The province remained peaceful until the 1979 Soviet invasion.

The province saw a number of battles during the 1980s Soviet war, and remained an active area of guerrilla warfare throughout, with local mujahideen commander Ismail Khan leading resistance against the Soviet-backed Afghan government. This continued until the Soviet Union withdrew all its forces in 1989.

Ismail Khan become a figure of controversy when the media began reporting that he was attempting to restrict freedom of the people, and that he was becoming more of an independent ruler as a warlord. He lost a son Mirwais Sadiq in 2004 during a fight with forces of other warlords. In response to this, the central government began expanding into the provide with the newly trained Afghan National Security Forces (ANFS). Ismail Khan was ordered to leave his post to become a minister and live in Kabul.

After 2005, the International Security Assistance Force (ISAF) established presence in the area to help assist the Afghan government. It is led by Italy. A multi-national Provincial Reconstruction Team (PRT) was also established to help the local population of the province. The United States established a consulate in Herat, trained Afghan security forces, built schools, and clinics.

The province is home to 90% of Afghanistan’s Saffron production (a $12 million industry in 2014). In 2015 the World Bank noted that saffron cultivation had provided Herat Province’s farmers a steady source of income, jobs for both men and women, and a decreased dependency on poppy cultivation.

With international borders to Iran and Turkmenistan and an international airport trade could potentially play an important part in the economy of Herat Province. Due to the lack of urbanization in Herat Province, around 75% of the population lives in rural areas and economic activity is correspondingly heavily reliant on agriculture and horticulture production (saffron, rugs, cumin, marble, animal skins and wool) with around 82% of economic activity coming from these fields in 2011. Marble manufacturing and light industry comprised the remaining areas of economic activity.

The total population of the province is about 1,780,000, the majority of which live in rural parts. According to Afghanistan’s Ministry of Rural Rehabilitation and Development:

Around three quarters (77%) of the population of Hirat lives in rural districts while just under a quarter (23%) lives in urban areas. Around 50% of the population is male and 50% is female. Dari and Pashtu are spoken by 98% of the population and 97.7% of the villages. Languages spoken by the remaining population are Turkmeni and Uzbeki.[7]
Hirat province also has a population of Kuchis or nomads whose numbers vary in different seasons. In winter 98,506 individuals, or 4.1% of the overall Kuchi population, stay in Hirat living in 166 communities. Around Three quarters (75%) of these are short-range partially migratory, 12% are long-range partially migratory and 13% are settled. Half of migratory communities of both categories migrate within the winter area, as well as in the summer area. The most important summer areas for the short range migratory Kuchi are Kushki Sangi, Farsi, Adreskan, Kushk Kohna, Kushk Robad, Pashtun Zarghun, Shindand, Guzara, Chisht Sharif, Obeh, Kohistan and Karukh districts of Herat province (in decreasing order of importance). The long-range migratory Kuchi are predominantly fully migratory. Their summer areas are in Ghor province. The Kuchi population in the summer is 112311 individuals.

The province is divided into about 17 districts and contains over 1,000 villages. 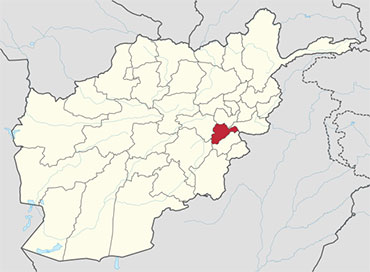